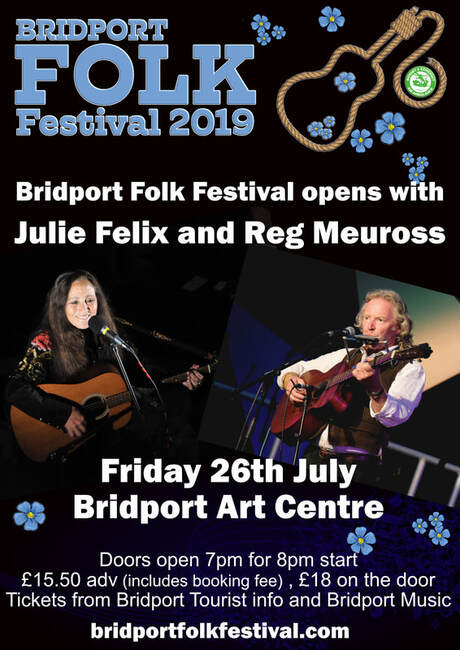 Our patron artist Reg Meuross has been named as the Folking.com Soloist of the Year 2019. Reg is currently touring with his latest album 12 Silk Handkerchiefs, a tribute to Hull’s Lillian Bilocca who led the campaign for better safety on the trawlers following the triple trawler disaster of 1968. He will headline our 2019 Festival on Friday night and is also running a songwriting workshop on the Sunday.


Reg says: “I’m proud to continue to be Bridport Folk Festival’s patron artist into it’s third year, and to support such an innovative and creative group of people. Chris Deacon and the team put so much energy and time into crafting what is a wonderful and worthwhile community event. The 2019 line up is going to be excellent, yet again, with musicians participating from near and far. Just up the road from the stunning Jurassic coast, for me it always feels like coming home, and I look forward to coming home again in 2019. Make sure you’re there on 26th – 28th July. See you there!”


Mark Radcliffe hails Reg as “a brilliant singer-songwriter and true troubadour with a social conscience”. And it’s not all protest, as well as story songs which bring characters from history to life and comment on life around him Reg also writes and sings some of the most heart-aching love songs ever written, performed with depth and spellbinding delivery. Reg has that rare gift of being able to touch people through his songs and performance, on a really human level, his words and music painting pictures that remain with the listener long after the song has been sung, accompanying himself masterfully on guitar and captivating audiences with his beautiful tenor voice".

“An insight into the human spirit and empathy the the plight of ordinary people.” fRoots Magazine
Tickets for our events can be found here...
bridportandwestbay.co.uk/tickets/bridport-folk-festival/ 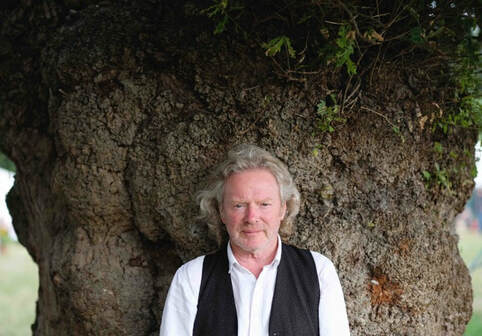 Reg Meuross first emerged onto the acoustic music scene in the 1980s with The Panic Brothers and has, over the years of touring and playing solo as well as with many other acclaimed artists, developed a style that as Pete Townshend says “allows the listener to embrace the whole breadth of his work over many years without distraction… he sings in the neutral accent of an Englishman who travels the entirety of the British Isles, and tastes all its flavours, influenced by all its most profound national colours. In this he reminds one of Roy Harper or Ewan MacColl, recent greats who went before him.”

In 1996 he released his first critically acclaimed solo album The Goodbye Hat and was nominated for several music awards. This was followed up in 2004 with Short Stories and in 2006 by the excellent Still. In 2008 he released Dragonfly, followed in 2010 by All This Longing. The Dreamed And The Drowned, released in 2011, is a collection of thirteen previously unreleased archive songs. It was commissioned and compiled by Stephen Jordan at The Bodleian Music Library, Oxford, who said, “this is Reg Meuross at his most eclectic and inspiring best.”

In 2012 Reg was invited by Abbey Road to record an album in their world famous studios and he took this opportunity to respond to the many requests for him to make a CD that reflects the warmth intimacy of his live shows.  The resulting album, Leaves & Feathers did just that, receiving 5 star reviews across the board. It’s a collection of twelve beautiful songs stripped down to the bare bones which prompted Pennyblack Music to say: “calling Meuross a singer-songwriter really doesn’t do the man justice. [He] doesn’t write lines of lyrics. He writes short stories then sets them to some of the most captivating melodies you’ll ever hear…. Meuross is one of the most talented storytellers of our generation.” Reg was awarded Best Vocalist 2013 by Fatea Magazine.

Leaves & Feathers was a hard act to follow, but his next album England Green & England Grey rose to the challenge dealing with difficult topics such as dementia, commemorated  the centenary of WW1, told the tale of the bandleader and his violin both lost in the Titanic disaster, The Band Played Sweet Marie; and it delivered an anthem for our times: England Green And England Grey. The album was awarded Best Album of 2014 by FolkWords.

Many will know Reg for the extraordinary intimacy of his live solo performances, and it was the countless requests at these unique events for “the one that sounds just like what we’ve just heard” that inspired the production of a trilogy of distinctive and entirely solo albums, returning to the solo format which inspired him to write and sing in the first place. December is a collection of 10 of the most beautiful songs which go straight to the heart. Pure Reg. The album was recorded on two days in London in 2016 with no overdubs or studio trickery as a gift to everyone who helped him bring his sweet little 1944 Martin to his hands from where he found it two years ago in San Jose and who helped lovingly restore it.  One man – who just happens to be “one of the finest songwriters this country has produced” [Mike Harding] and his guitar (and a touch of harmonica). In the second in the trilogy, Faraway People,
Reg comments courageously on the world we are living in now, from the ravages of austerity to the injustices of racism and the plight of refugees. He also delves into history, echoing warnings that resonate through the decades and are still relevant today. Stories told include people from living memory such as anti Nazi activist Sophie Scholl from WW2, and Michael Brown (victim of the fatal Missouri shooting in 2014) as well as ancient history (Cicero) and even a fictitious meeting between two of the artist’s greatest heroes. The title track was awarded Best Song of 2017 by Fatea Magazine. Amongst the protest there is beauty, love and humour. The third in this solo trilogy will be released in October 2019. 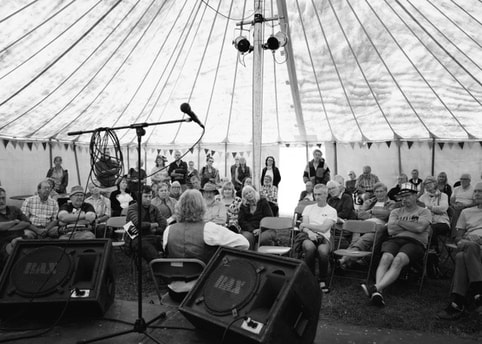 In February 2018 Reg released a second collection of previously unreleased archive songs (the first being The Dreamed and the Drowned) Songs About A Train. Fatea said “A lot of artists strive in vain to make an album of this quality, yet with these eleven previously rejected tracks Reg has once again produced something truly special. Songs About A Train is an absolute pleasure to listen to from start to finish.”

More recently Reg was invited by Stockfisch Records to re-record a number of songs to make the eponymous Reg Meuross. This was released in April 2018. 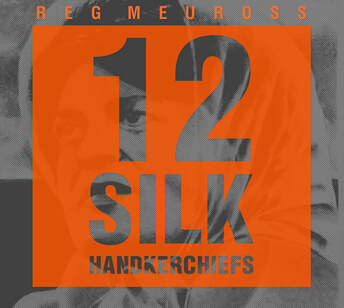 Before 2018 was out Reg released one more album, the song cycle 12 Silk Handkerchiefs marking the Hull Triple Trawler Disaster of 1968 and celebrating fish wife Lillian Bilocca’s fight for better safety on the trawlers. This album is now on tour including some special shows which feature Hull musicians Sam Martyn and Mick McGarry and narrated by author Brian W Lavery whose book ‘The Headscarf Revolutionaries’ inspired Reg to write the song cycle.

Due to popular demand, Reg is re-issuing in 2019 6 of his back albums which had been out of print. The Goodbye Hat, Short Stories, Still, Dragonfly, All This Longing and Leaves & Feathers are all now available as a beautiful Reg Meuross Retrospective collection.

“When you have 2000 people singing along, you’re doing something right.” Great British Folk Festival


“A mighty songwriter and an equally fine singer” Martin Carthy


“One of the most talented storytellers of our generation” Pennyblack Music


A deep well of compassion and insight into the human heart and spirit.” Mike Davies, Folk Radio UK